If you have a vehicle with a 5.9 Cummins common rail, there is a chance you’ll have some problems with your stock fuel injectors.  It might not happen, let’s hope, but faulty injectors with this common rail are not that uncommon – especially if you drive a lot.

The first time your injectors brake down or surpass their life span, it will be the time to choose new ones. If you’re willing to splash the cash earlier and change them immediately for better ones, then by all means.

Either way, here is a list of the best injectors for 5.9 Cummins common rail (mainly) to make you feel safe and sound.

These NMN Precision injectors are compatible with Dodge Ram 2500 and Ram 3500, or rather any other vehicle with 2004-2009 Cummins 5.9L diesel engines.

These above-mentioned models are very popular and are driven daily across the United States. For that reason, a plethora of engine parts are being made perpetually, especially fuel injectors.

With NMN Precision 0445120238 fuel injectors, you will get good, durable injectors for your Cummins. It is estimated that these injectors have a life span of around 300000 miles. Be that as it may, checking the status of your engine is recommended after every 50000 miles.

They will work with high precision and endurance, completely disabling the possibility of leaking, detaching, or simply not injecting fuel properly. At least, for their life span.

A two-year warranty is there to remove any suspicion you may have.

Very affordable price is one of the biggest advantages of this already good injector. Buy a whole pack and save some money.

The downside of this purchase is the package – the packaging is quite poor, so be sure to check the injectors’ state before installing them on your common rail. 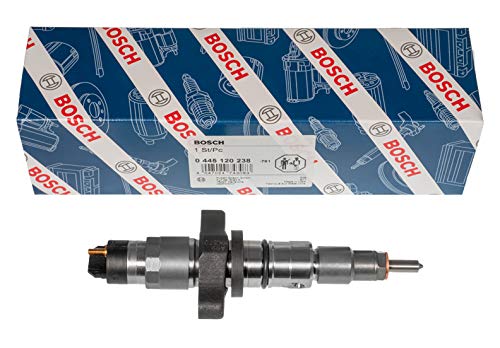 Bosch has always been a good choice for anything you need, and will definitely remain so in the future. This company is all about high-quality, and their fuel injectors are no different.

With Bosch 0445120238 injectors you can make sure your 2004.5-2007 Cummins engines will work flawlessly.  Incredibly durable, reliant, precise injectors will serve you as long as you have them.

The manufacturer will support its quality with an unlimited mileage 2-year warranty. And that tells you everything you need to know about its lifespan more or less. Bosh fuel injectors can go endless miles if every other aspect is formidable as well.

Unlike the previously described injectors, where you could buy a whole bunch of them for a few hundred dollars, these are much more expensive. Changing all 6 injectors at the same time will cost a small fortune, but it’s definitely worth it. Also, there won’t be any core charge either. 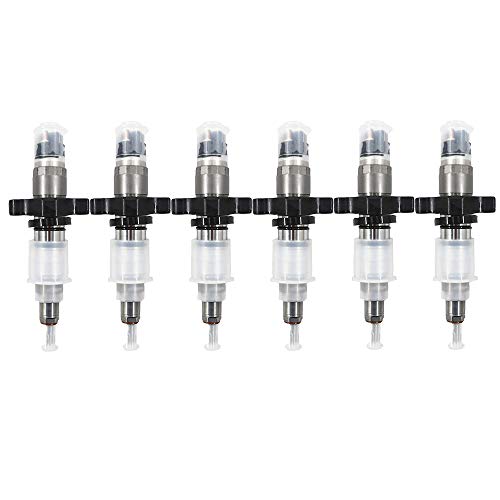 This is a whole set of six fuel injectors. Bear that in mind when ordering, because the price is in accordance with that.

The injectors are compatible with 2004-2009 5.9 Cummins engines, broadening the spectrum of its use.

Labwork’s diesel fuel injectors are of good quality, and very easy to install, as they come with compression rings. Once fixed, they will do their job properly.

There is no need for core change as well, making them quite affordable and easy to buy.

If you manage to buy them individually, of course, you should. But be careful, for there are a lot of scammers trying to profit from this product (being popular and often bought), and therefore sending injectors in pretty bad shape. You should only buy them from a trusted seller. 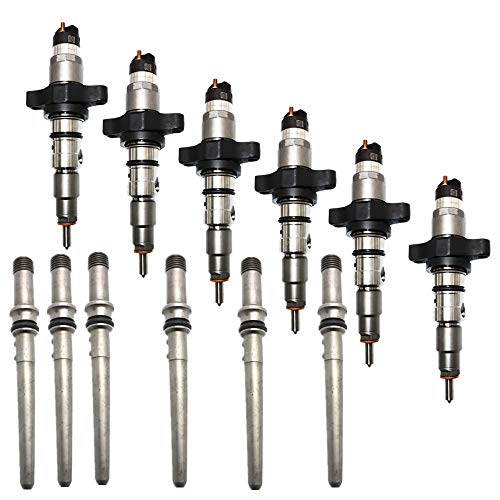 This is yet another very good set of six injectors, but this time for Cummins 6.7L diesel. They can fit the 2003 and 2004 Dodge Rams, and they are quite good at it.

HX has given us a great deal, albeit a bit pricey (at least for this list). Not only will you get six fuel injectors, but also six connector tubes.

The best part is that these are interchangeable with several other fuel injectors from HX, and you can use them accordingly.

Of course, they are of pretty good quality and will serve you well.

The main downside is that the warranty is only for three months and/or 5000 miles. That is pretty much nothing. This is a good set, but if God forbid something happens, you had really just thrown away your money. So tread carefully. Make sure to install them properly and try not to cause any damage in the process. 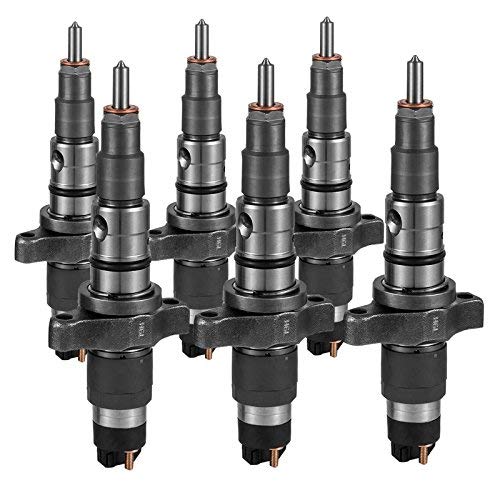 Yes, the engine common rail is usually well hidden, or at least not that visible, and that is a shame, for these fuel injectors look fantastic! A combination of black and silver is simply stunning.

In addition to good looks, which is obviously not that important, they provide very good performance as well. The material is of high quality (a combination of metal and plastic), they are easy to install and well-fixed (if installed properly).

The seal rings are on the inside, and they are protected very well, limiting their exposure to fuel. The fuel flow will not damage them this way, nor will the flow be hindered. This makes them very durable as well.

The parts are interchangeable once again, but this time with an even bigger number of injectors! 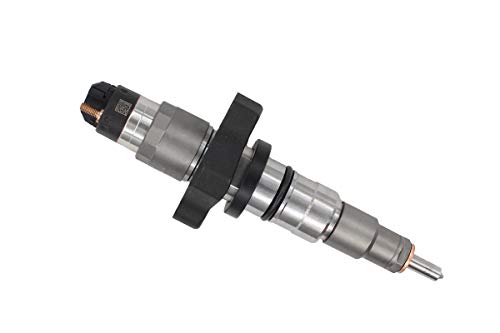 And the final product on this list comes from MOTOKU – a single fuel injector which is simply bang-for-the-buck deal. If you’re thinking of buying all six – yes, definitely!

These injectors spray the fuel perfectly! Using these will slightly improve mileage-per-gallon and truckload. And that’s a fact.

In addition, they are not expensive at all, so buying all six won’t be a problem. Highly recommended for people on a tight budget.

Buying any fuel injector for your engine is simply not possible. There are different types of injectors, sizes, performance ratings, etc.

How to choose the best injectors for 5.9 Cummins common rail?

Well, it’s actually not that difficult.

First, it is recommended to see what type of fuel injectors your engine needs.
You can find which one you need in the car brochure (manual), or ask your car mechanic, or even google it! The last option is the least desirable, but possible nevertheless.

Second, how big they should be.

Size matters. It is very important for the injector to fit into the engine. If it doesn’t – if the size of the injector is too small or too big – it can lead to serious engine damage.
Some of the wrong-sized injectors cannot even fit! There is nothing more frustrating than trying to connect something that won’t fit. Even the child gets angry when that happens with their toys. Now imagine spending hundreds or thousands of dollars before that… An even worse scenario is if it fits! If you manage to install oversized/undersized fuel injectors onto your engine, there is a huge chance it will lead to catastrophe! The fuel might leak, the injector might disconnect, it can set your car on fire or gradually destroy your engine with bad fuel flow.

Thirdly – performance.
There are injectors with high-performance capabilities that are used for racing or sports cars. Putting one of these on a diesel engine will gradually destroy it. Your stock injectors already work at about 80%, and increasing that number will only increase the speed of engine degradation.

Also, make sure that all the injectors have the same performance. It is very important that every injector squirts the same amount of fuel into its valve at a specific time. Having one that pumps more fuel into its combustion chamber will only disrupt the piston rhythm, which, again, leads to engine destruction. Q. How do I know when to change my injectors?

Q. Should I buy more powerful injectors to boost my car’s maximum speed?

Q. How to replace fuel injectors?

And that wraps up our little guide on the best injectors for Cummins common rail. We hope that these paragraphs were useful to you and now feel more knowledgeable on the subject, as well as more confident about making the purchase. Stay safe, folks!